“Sending it” to the next level

Brian Moon likes to ride his modified Polaris RZRs on Minnesota’s ATV trails and tracks at a “spirited” pace. He also likes to protect his machines from unnecessary damage. 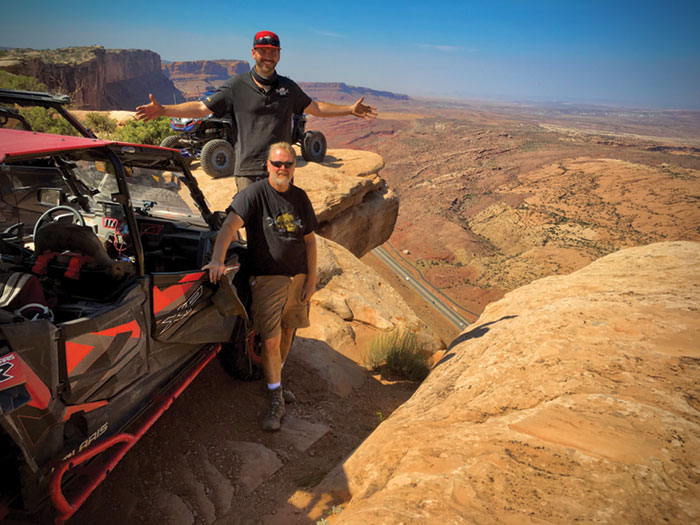 Brian and Jim Moon celebrate their victory overcoming long-distance, off-road challenges not experienced before, at an overlook on the Poison Spider Mesa Trail near Moab.“Not a big fan of fixing broken toys when I could be riding with friends and family,” he said. Then Brian joined his best friend Geoffrey Bonte and a group of extreme rock-crawlers on a 350-mile round trip in Colorado and Utah, complete with a chase truck, spare parts, and mobile trail welders.

That changed everything. We visited with Brian to get his thoughts on taking ATV riding, not just to the next level, but to the extreme.

Q. You said you have a core value of fun. What do you mean by that?

A. I believe that at the core of recreational activity a renewal process unfolds. We can be renewed in a moment through play. It’s a positive experience to get away from the concrete jungle. I like to say that people, places and fun on wheels get the best out of everyone. You are never more yourself than when in a state of play.

Q. You jumped to a different kind of riding on the Kokopelli Trail, right?

A. I’ve been a go-fast trail rider, an ice racer, and a slide-sideways guy. Then in 2020 we were invited to go on a 350-mile run from Fruita, Colorado to Moab, Utah, with an experienced group called Kokopelli SxS. We drove into terrain we had no bearings for, slow paced, methodical driving, while feeling like we’re going to tip over all day. My dad Jim Moon and I called it a “pucker run.” Neither of us had ever done something that technical and extreme. There are scenarios out there, if you roll and tip, you will ride the elevator all the way to the bottom of the mountain.

Q. Was your vehicle rock-crawler ready?

A. I had a modified RZR XP4, with bigger wheels and tires. Let’s just say it had a lot of cool accessories for comfortably cruising the trails with family, but it hadn’t been modified to be an extreme rock crawler. I had heavy-duty axles and a winch but didn’t have low-range gearing, high-clearance suspension, or an aftermarket roll cage. 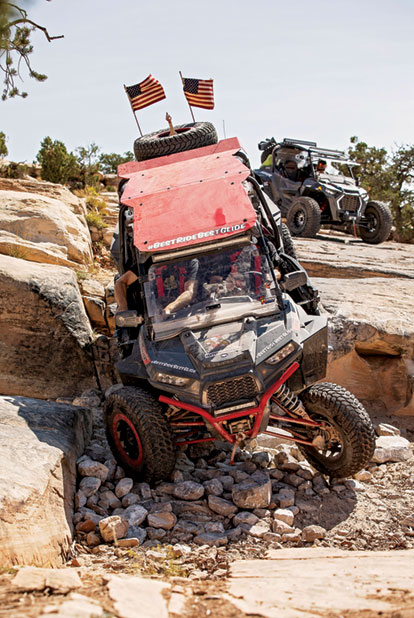 Experiencing “baptism by boulder,” the Moons test their rock-crawling ability, slowly working their way down Wipeout Hill, a challenging formation that’s part of the Behind The Rocks Trail.Q. So a lot of preparation?

A. I had no idea what all I should bring. I had an open conversation going months in advance. People will go so far as to take their entire toolbox and spread the tools out on the shop floor, then take pictures and make a list of everything they need, all the way down to spare nuts and bolts, part numbers, and specific sockets and wrenches. “Bring these zip ties because they don’t break.” If it’s not on the list don’t bring it because it’s extra weight. That’s their passion and they want to help the other guy.

Q. What did you learn riding with a group of extreme drivers who bring a chase truck with spare parts and a welder?

A. I started with the premise that this was going to be hard and learned it wasn’t, because there were a bunch of people who had been there before me, and they were excited to help me figure it out and find my way. Everything from what I needed to be street legal in Utah, to the very specific tools I needed in my toolbox, what box and cooler fit perfectly in the back of the RZR, and the spare parts and emergency supplies I needed to have in my rig. And then learning to plan with friends because everybody doesn’t need to carry everything. But between everyone we need to have all the essentials when you’re 150 miles out in the desert.

Q. Did the group help you gain confidence in rock crawling?

A. The owner of Side By Side FURY, Brent Werner, jumped in my machine and said, “Let’s see what this can do!” and we took off. He’s balls to the wall passing all the other drivers on the trail, and says, “Hey if this thing breaks, I’m going to take care of you.” I’m holding on and he’s bouncing off every rock and through every nook and cranny like it’s normal, I had no idea my machine could do all that and not completely self-destruct. We had headsets on so I started asking questions, and he taught me how to drive in that environment, and everything I needed to know for the rest of the trip. We literally parked at the Top Of The World and he handed me my keys and said with a grin, “Good luck,” as I opened my door, looking down a 2,000 ft. cliff.

A. There’s always one or two spotters to help with route finding and where to turn. Half the fun I learned was watching people solve the puzzle getting over obstacles. It’s a confidence-building experience. You learn about yourself and your machine. Building relationships with people, learning to trust your spotters, and trust your driver if you’re the passenger. My dad was a great copilot.

Q. So a whole different mindset?

A. I didn’t realize how excited some people would be when a machine broke down. I saw axles in and out of cars in 10 minutes. I saw control arms put back on with bailing wire and driven all the way back to town. I saw rolled machines towed out and torn down at the condo only to be back on trail in the morning. Riding in territory where we had to plan for our machine to break down, and spend the fun coupons, that was a big barrier for my dad and I. To tip over and roll was an uncomfortable thought all day. But the people around me, I had to trust them and tell myself they’re all okay, so I’m going to have to be okay. They helped us break that barrier. 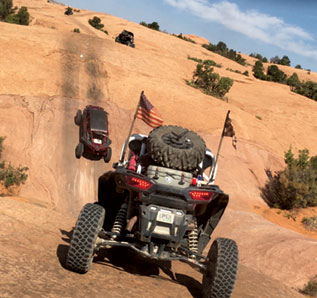 Thirty vehicles in the Kokopelli SxS group make their way up the slickrock of the Hell’s Revenge Trail. Sandstone provides good traction on the steep slopes, when it’s dry.Q. What was the most “puckered” part of the trip?

A. We did a night lights ride on the Moab Rim Trail. I figured out that we were bouncing around on rocks in the dark a stone’s throw away from a 200 ft. cliff. Mentally as a passenger, even in a purpose-built turbo rock crawler, I couldn’t handle not being in control and the real possibility of a rollover. All I could imagine was going off the cliff. I jumped out the rig and became a spectator just before the machine I was in wheelied, pirouetted down an obstacle. This was early in the ride, and I gladly watched all the fun the rest of the night. The view at the top was spectacular but I was never happier to be down off a mountain.

Q. What do you mean by lowering the barriers to entry?

A. Riders need the barriers of entry lowered in our sport so they can learn to ride progressively outside their comfort zone and take it to the next level. Just being able to drive with the crew in Utah, I had to first be street legal with my ATV to meet the laws. That part alone can stop people from adventuring. Do I want to go from trail riding to extreme off-road? Do I want to start ice racing? Do I want to leave my local ride area and go to another part of the state? Do I want to go across the country? You must find the riding community with the answers. It’s a lot easier to get past those barriers if you ride with people who have already been there and can lay it out for you.

Q. Did the Kokopelli ride stretch your off-road ability?

A. I drove the whole roundtrip ride, learned a lot along the way, and had a great experience with my dad and new friends. Riders that do it twice a year showed me what my machine could do. They proved to me what I can do. I learned to listen to my spotter, keep my foot on the skinny pedal, steady on the gas. Comfortable or not you just gotta send it.

“Special thanks and shout-out to Geoffrey Clark, Eric Flack, Konrad Mitchell, and Craig Charleston for paving the way for all the crazies,” Moon said. Brian was featured on the cover of the Jan/Feb issue, roosting a bowl at Spider Lake on his Raptor 700R SE. He is also an extreme skier and electric mountain biker, and gets just as much thrill from those sports, and getting his kids involved in them. For more photos of the extreme ride Brian went on, check out the Facebook page of Kokopelli SxS. The trail, named after Kokopelli the deity of fertility, varies widely in difficulty, terrain, and elevation. 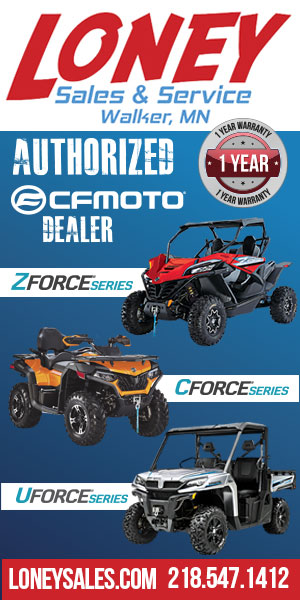 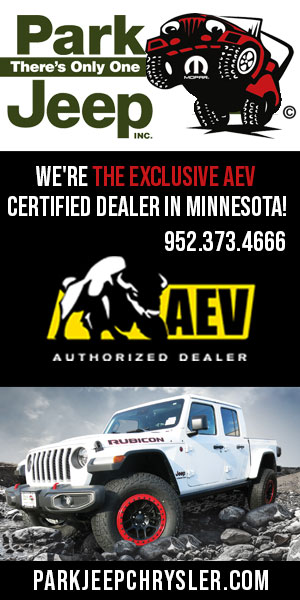